My wife had a friend and her kids in town for the weekend, and I reluctantly got hopping around 9am to clean up the house.

My wife's friend came over with some other kids we both know, then the women gathered and cackled about whatever it is they talk about. I was given an excuse to be absent. I gathered up my laptop, a couple snacks and a coke, sauntered upstairs and had a nice relaxing afternoon playing poker and listening to iTunes.

Four o'clock rolled around and I luckily remembered Saturday's with DrPauly on PokerStars, a tourney I'm not usually able to play. 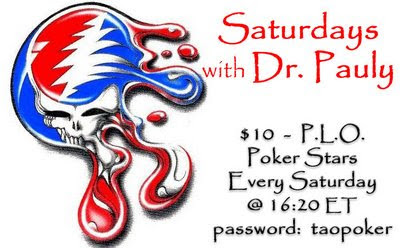 For the first hour or so, I was still playing in 2 FT tourneys so I didn't pay too much attention.

Fast forward 2 more hours and I was locked into a final table battle. I managed to have the chip lead coming into heads up, but lost 2 pretty horrible hands and didn't make much of a fight of it.

I don't play much Omaha High, so I stuck with playing Aces, Kings, Queens, and some sooted connector options. When the blinds were getting big I only played position and premium hold'em hands. I got gunned down by a rivered nut flush and a well hidden low straight both against premium hold'em type hands. I also played two of the steps tourneys and got a step 2 on 1 and a rebate on the other.

I'll have to give some PLO tourneys a few more tries to see if today was just a fluke.
Posted by 23skidoo at 12:44 PM

Congrats on the cash!

But the more important question is . . . who was your chat buddy???