The world owes you nothing.

Hey Kids, I get to play poker tonight!! Aren't you soooo happy for me? Cause I am. I get some much needed vacation next week with a long weekend at the beach with family and more and more family weeeeeee! It's a good thing I like them.

Big shouts and hollas out to NUMB, Blood and @themark for cashing in WSOP events. Bloggers gotta represent.

That's all, I'm sure you're glad you wasted the time reading this. 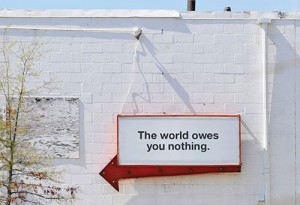 No Poker? No Problem

So, its been a long time without online poker for me, but I've found many ways to effectively pass the time and also occasionally scratch that little gambling itch.

I've played in 3 of the 5 monthly poker tournaments near my neighborhood. There's usually 2 tourneys a night and anywhere from 12 to 20 players. I've cashed all three nights I've played to put myself in good position for the year long payout. I'm currently sitting in 2nd place.

I've recently joined Draftstreet to see if I can figure out how to beat daily baseball leagues. It's been a mixed bag so far, I've cashed in only 1 event. So I'll keep on the low and free tourneys until I get a good grip on the scoring system. I think if you use that handy little link there I and you will get some sort of bonus for playing $ games, so hook a brother up.

The WSOP has begun so I can begin sweating my horsies. The Leak should make things interesting.

I've been actively seeking out new music and keep finding old stuff. I have been picking through the Grateful Dead library and been getting some good bootlegs. I've also filled out my library with older Massive Attack, Acen (yes I went though the early 90's rave scene), the entire Daft Punk library, the new Beasties, and a Joy Division remaster.

I keep expanding my role at work by digging in to Wordpress (not that this site shows it), Sitecore, and some other CMS. Enough so that I know I will never have the patience and attention to detail to be a real programmer.