April Showers, or When it Rains it Pours, or Full of Sound and Fury, Signifying Nothing.

April has been a heck of a month, and like the rhyme goes I 'm really hoping the storms will nourish my life's soil and provide flowers for May and beyond.

I nearly whiffed on posting in April for various reasons.

First of most was leading an intrepid band of scientists, archaeologists, and drunks into the far reaches of Madagascar in search of the recently missing Al Can't Hang. We were hot on his trail in Egypt where he had single handedly endangered the Scarabaeus sacer because of the rumor that the beetle's blood closley resembled Southern Comfort. We cornered him in Madagascar performing rituals with the natives. He had devolved so far that his eyes we're nearly blind, his hair, ratty and curled from overexposure. He had given up SoCo and moved on to a mixture of citronella and kerosene. Here's is the last picture we took of him before his capture. 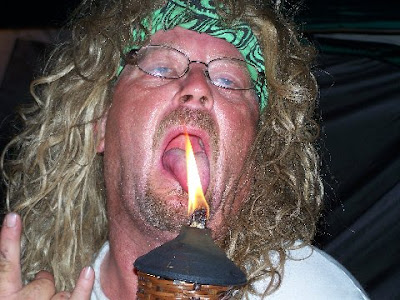 Al is now resting comfortably among his friends and family and will be ready to return soon.

I unbelievably secured a TOC seat in the BBT3 by taking down the MATH. What little poker I have been able to play has been pretty good for the rest of the month.
I managed to play a few other tourneys and got close, but no other big scores.

Work has been more of the same, possibly a little busy. I managed to hire a new employee who looks to be a real good choice. Here's hoping that first impressions last. Soon I'll be able to go back to finding clever ways of making someone else do my job.

A couple weeks ago I made my way to NYC and was able to have a pretty nice dinner with bloggerdom's soon to be rambling, gambling and writing couple. Final verdict B- mostly because CK and I agreed on a wine, and it was not so good. The company and conversation and the fact I was nicely buzzed made me not care a whole hell of alot about it.

David Williams joined the the regular boobs at the Bodog donkament. I was seated to his right at the beginning and couldn't wait to have a chance at busting him. 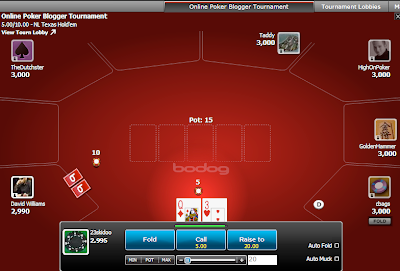 For some stupid reason I was moved about three hands later.... Can someone at Bodog explain moving players at the beginning of a tournament?


Lastly and most importantly, I will be able to achieve one of the goals I set for 2008. I booked my flight for Okie Vegas!!!

I pushed real hard to make this happen this year, now I'm ready to goooooooo!

Hopefully I'm more motivated to post this coming month and I'll be able to fill your lives with pointless drivel once again.

It will be good to see you there and I'll raise a shot of crown in your direction my friend!